Man doesn't live by bread alone (but it could still be of use!) 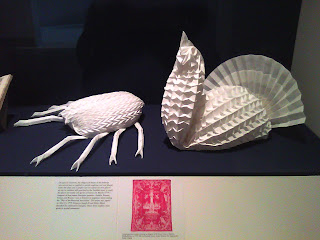 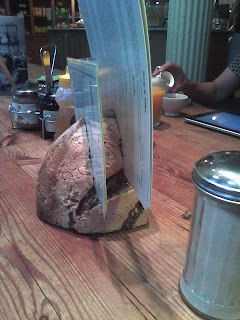 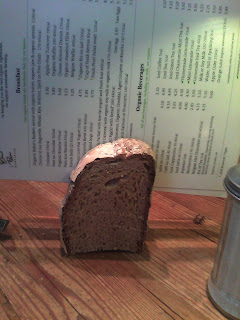 I had no idea that napking folding (origami-style) used to be an art & a discipline in & of itself: the above photo (taken at MET) is one Matthias Geiger's creations (Matthias used to teach napkin folding at the Unviersity of Padua).* (*details for those who care to learn more at the end of this post).
Bread as a menu holder is from Au Pain Quotidien in Soho. Want to copy it, but don't eat enough bread (or don't offer my guests the printed menu of our intimate dinners?)
************************
(*With the Renaissance and the increase in prosperity and luxurious living, grandiose displays of table decorations became fashionable at the many courts of Italy and the new fashions for display spread from Italy to the northern Europe. One of the customs was to fold table napkins into elaborate centrepiece table decorations in the form of animals, birds, sailing ships and other impressive models. The starched napkins were pleated, first in one direction and then the pleated napkin was cross pleated so that the second pleats were at right angles to the first. The resulting doubly-pleated napkins formed a pliable medium that could then be moulded to form the birds and other creations. Several napkins were often used to complete the creation and they were attached together by being stitched with red thread. This was a long way from our modern idea of folding from a single square of paper without using cuts or fasteners or glue!
Italian books mention the pleated folding of napkins, from the middle of the 16 th century, but the most famous Italian treatise was that of Matthias Geiger, published in 1629. His book, Li Tre Trattati" contained table decorations of most elaborate animals, birds, fishes, dragons and ships in full scale. )