A man who knows...where romanticism separates from sentimentality 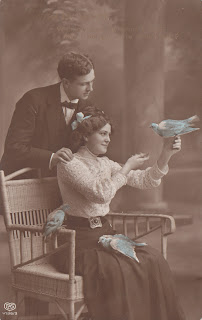 (text on this card reads):
WITH MY HEART. With my love, my heart I send. May I call you more than friend?

Finally somebody else said it!!!
I met a man last week & after I mentioned my not being romantic he interrupted me & asked: "But are you not romantic or unsentimental?". Had our conversation not taken place on the phone, I could've hugged & kissed him, maybe. Instead, I simply shouted in joy, amazement & gratitude, for I spent years saying that most people (the majority of them being MEN!) think of themselves as romantic, while all that they are (and it's a much deadlier sin) is sentimental.
How do I define a difference? In short, romantic for me is not a 24/7 state of mind. It is something that is not absolute, permanent. It depends: on the context, on the person, on many variables. Sentimentality, the way I see it, is something that is always part of you. It is your way of looking at the world, your life philosophy (or rather, the absence of it!) It is the lack of critical spirit. It's admiring the cheesiest of things. It's the rose-colored spectacles (always, not only when you are 'supposedly' in love!).
What it also means is that people who see themselves as neither romantic nor (God forbid!) sentimental, can change & at times become romantic, whereas it's highly unlikely that a sentimental person would change radically...

So this post is dedicated to my new friend. A man who knows. And since he knows what I've known for a long time, I feel that maybe, finally, I've found someone whom I'd want to - quoting from the card above - 'call more than a friend'.