The less you do something, the more you talk about it 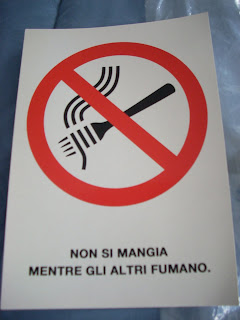 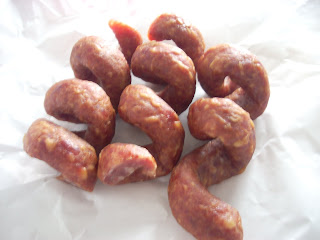 I am pretty sure that those who do something & do it often, tend to talk less about it. So since my Thanksgiving yesterday was unorthodox (meaning 'healthy'), I will carry on talking about food.
But with a twist.
First comes a fond memory of my hometown Chicago - pig tails we bought at the most famous German store. Too sweet - the tails, as well as the memories themselves.
The other image is something I picked up at a restaurant in Turin years ago. It says: "You shouldn't eat while others are smoking". It's a good example of turning the logic upside down and coming up with something fun.
After all, why not see it this way? Who says you can't?
Continuing with being very politically incorrect (but very honest as well), I can say that even though I don't smoke & never did, I love the smell of smoke (Freudian? my dad is a chain smoker) & when I started spending more time in Italy I would buy smoking compartments train tickets only, for in my mind people who smoke are more interesting than those who don't.
And the "We serve vegetarians..." is a clever ad campaign that would appeal to my carnivorous friends like Marina.