I cried because the Cupid was so...ugly & tired 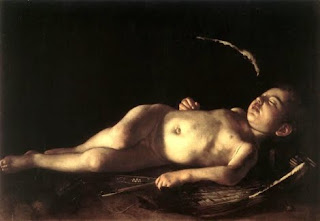 Here's my unexpected strong emotion: this past March I went to see an excellent Caravaggio exhibit in Rome (it is Caravaggio's 500 death anniversary this year, so he became 'hip' & the churches with his fresco cycles you normally had all to yourself are impossible to get into now).
Anyhow, I always loved Caravaggio & I found most of the works exhibited in Rome admirable.
However, when I saw this one (a tiny painting, too) - "Amorino dormiente", I felt tears coming.
Ok, I've been moved to tears before. But this time something else happened. Hallucinations. Yeap, that's right. As I looked at Amorino, I swear I could hear him breathe. You know like when you stand next to a child that is sleeping and you can see his body quiver a bit, hear his breath?
It was very unusual for me, for no matter how much I love art, I am never so taken by anything.
This painting has a fascinating story (wiki it, if you want to know more). What I am thinking about is the fact that I've surely seen it before - it's permanent home is in Florence - but I don't remember ever experiencing something like this.
At any rate, as it is the case with me, having recovered from my tearful spell, I tried to figure out why I was so moved.
My only explanation? It was because this Cupid was so un-Cupid-like: he really looked very tired & old, like an old man rather than a little, fresh, rosy-cheeked amorino.
When I later read theories with regard to this painting, some say that the model for Amorino might've been either a sick or a dead child...
Now, going back to square 1 (previous post): had I known that, maybe I would've been 'ready to be moved''. But I had no idea.
And now I treasure this memory, savour that feeling.
The most interesting thing is another one: this Cupid was indeed very un-Cupidy because even though the exhibit was totally packed, no matter how many times I made my way back to be with it, I always found myself to be alone.
I had this un-charming, beautiful, ugly & tired Cupid all to myself.
Poor baby: the audience wants pretty young things, is that it?
Postado por Pearlsboreme às 18:51