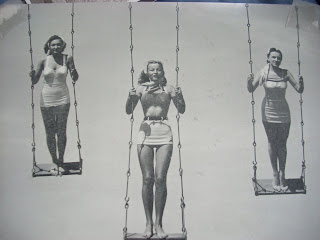 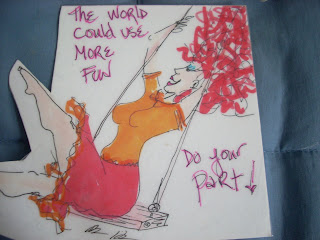 A dear friend of mine, David, told me once that he has this secret dream (not so secret now): to dress up as a Giant Banana & go walking in the Central Park in NYC telling people that he is a Gay Banana. Imagine a scene: him (or it) sitting down next to people, on a bench, and saying this like a confession.
Another dear friend of mine, Isabel, told me once how she observed people's reaction while she was blowing bubbles while waiting for her boyfriend outside of one of the Washington DC metro stations. Some people (the majority, actually, this being a stiff DC area folks) would look at her like she was crazy. But some would smile. One guy even looked at her, went down the escalator but then came all the way back & thanked her for doing this.
It happens to me, too, when I go out wearing my pieces. Every time I leave home now I am anxious to see what's going to happen next. I 'collect' smiles, questions, I make friends.
Something I didn't think was possible turned out to be very easy: attracting attention of the crowds at 5pm on the main Avenue of the 18 million city.
How I love that!
Postado por Pearlsboreme às 22:31