Hot from the press! Or lukewarm in the hammock. Are the French hot or what? 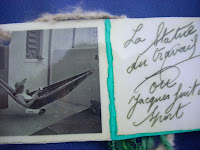 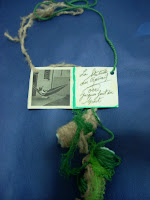 About an hour ago I had a sudden urge to make a piece for myself, not for a client (I love my clients but above all I love making jewelry).
So I put together this necklace. I bought 2 identical photos at the flea market here in Sao Paulo, except for 1 bears this inscription (in French) on the back: "La statue du travail ou Jacques fait du sport" (transl.: "Statue of Labor, or Jacques is doing physical exercise"). This necklace, by the way, is dedicated to Ricardo, meu amor, with whom we somehow always wind up talking about hammocks and their role in the Brazilian life.
Well, this is the year of France in Brazil (Brazil used to be called "Antarctic France" by the Frenchmen at the times when they used to 'own' Rio de Janeiro), so I'll tell 2 of my favorite stories that deal with my favorite topic - cross-cultural (mis)understanding (both of them have Jean-Paul Sartre as a protagonist).
In the first one, JPS is confronted, for the first time, with the Brazilian national dish - feijoada - to which he reacts, shocked, by saying: "C'est de la merde, ca!" Sublime!
In the second episode a group of Brazilian intellectuals, future President of Brazil FHC (Fernand Henrique Cardoso) among them, are walking on the street intent on not loosing a single word JPS utters. At a certain moment, however, JPS finds himself to be walking completely, totally alone. When he turns & looks back he sees that all of his entourage are walking, same admiration on their faces, with another idol, of another kind: Pele.
So here's to cultural cliches: the French 'merde' meets the Brazilian soccer.
One more note on soccer: a comedy TV program appropriately called 'Monkey news' recently talked about how the French language doesn't do justice to a soccer game. When there is a gol, instead of a masculine and euphoric 'e' gooooooooooooooooooooooooooolllllllllllllllllllllll' the Brazilian style, the French chant, female style, 'o-la-la, le ballon!"
Who are the real men then? Are the French hot or what? Well, my year of France began during my last year in the States when I had 6 French 'boyfriends' in 12 months. 3 of them were among the best lovers I've had, and 3 among the worst.
So, what does that tell you? Objectivity. I'll keep on trying and I am dying to get Terre d'Hermes, my best experience's favorite perfume.
Postado por Pearlsboreme às 18:29