More on landing & taking off: the guy I would've loved to go out with. 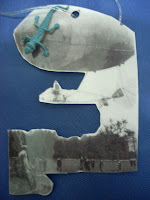 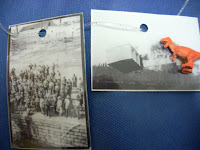 Santos-Dumont is a fascinating figure: I keep wanting to learn more about him but always run out of time to go all the way, maybe because the 'way' is long, he's done many things, some of them (most of them) wonderfully crazy. I fell for him when I learnt about how he'd show up at his friends' house in Paris by flying through the window. Wow! I'd go out with a guy like this, even though not always would he land smoothly (but then I always do, right?)
I saw an exhibit on his work at the Museu de Casa Brasileira about 2 months ago. There I was surprised to discover that his first planes had the 'vice versa' orientation, meaning that the tail of the plane was its head. I also found out that he was the person who invented the watch as we know it (are the wrist watches dying, by the way?) but gave away this idea to his friend...Cartier. Ever heard of this guy? Yeah, right!
The best moment came when I was studying one of the 'ancient', 'dinasour' models in the garden. There I was, looking at an old model & on the horizon I saw the sky-scrapers on Avenida Faria Lima, one of the financial hot spots, almost each of them complete with a helicopter landing pad. Sao Paulo is known to be either first or second city in the World (after NYC) in terms of the number of private helicopters. What is not well-known is the fact that here 40% of the helicopter landing pads are illegal.
Would Santos-Dumont mind that? I doubt it.