Multiple Majas, or there is more way than one to have fun dressing or undressing 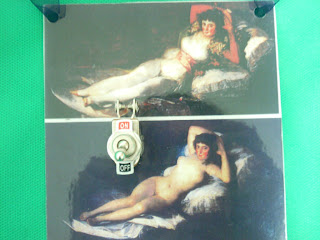 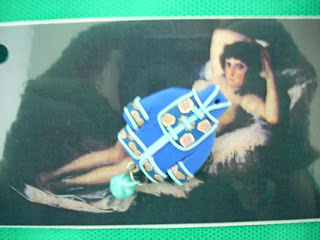 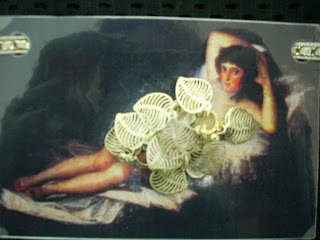 So, just to give you an idea (not that you asked me to explain you how & why I do it). The first one to get dressed was the Maja that is now wearing golden leaves. It was a modest first attempt. Almost romantic, innocent, I'd say. Then one day I bought a lot of stuff at a TV/radio store (cables, ON/OFF buttons or whatever they are called). Had no idea where I'd be using them, but they looked cool. ON/OFF was going to become a ring. In order to save money on lamination I paired up dressed maja with the undressed. And then - a touch of playful genius - the ON/OFF thing literally fell on the page. So there it was. Dressed/Undressed. ON/OFF. Easy.
Then came a bunch of peppers. Bold, showy, easy to get, easy to sell. Sold the first one practically the moment I left the house.
The last one was the Japanese Maja (or Maja from Sao Paulo - SP is the city that has the biggest Japanese population outside of Japan). For those who like to think about the global world we live in (please bear in mind that I'm always ironic), that's the piece to wear.
Now, going back to the ON/OFF piece: remember the site Overheard in New York?
I feel like having a paralel blog just with the comments & questions based on my pieces. The best one about the ON/OFF was: "Is this a girl from the Titanic" (do you recall the episode when Leo di Caprio painted his lover's portrait? I didn't, for I haven't seen the movie, but you should, right?)
When I responded negatively, a friend of a man who ventured this suggestion said that the problem of Brazil was that people were not educated enough.
I was surprised by this statement, by why she thought of this at that particular moment, but deep inside I couldn't agree more...
Here's to culture then. To knowing some things without becoming snobbish. And to being able to play with art. Play in general. Taking things seriously, but not feeling all this weight.
Here's to my best friends who all have one thing in common: being 'light' on the outside & 'heavy' on the inside. Substance doesn't mean gravity.