Making up for the lost childhood 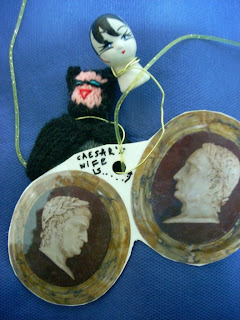 The compensation mechanism is something that I totally, absolutely believe to be true. I guess I didn't play enough when I was little, so I am making up for it now.
When I was 17, I'd dress up conservatively (in a suit!!!) - now I only accept to downtone my appearance when I am training big companies' CEOs (even though I think I'd train them even better if I show up wearing what my heart desires).
Ok, back to my bijoux: creating some pieces goes exactly according to a plan, while others take an unforseen direction. In this one, I originally planned to use the 2 Ancient Roman Emperors' medallions together with the comic-book style dialogue between the two of them. But then I got a Peruvian woolen toy (a cat lady? it looks like a Devil to me!) and a dolls head. When it all came together, a necklace took on a new meaning....
And in order to make sure everybody would get it, I even gave away the beginning of the saying: "Caesar's wife is..."(O tempora, o mores! This doesn't seem to help a lot in 'getting it all').
It's probably one of the craziest necklaces I have but I love wearing this little theatre on my throat!